If you think you may have been the victim of health care negligence contact our specialist solicitors now for free advice.

Instant, no obligation advice from our friendly solicitors

The term NHS Misdiagnosis refers to the breach of duty of care of medical care by the NHS. In which case a medical professional towards his or her patient causing unnecessary pain, suffering, trauma, a worsened medical condition or leading to the death of the individual. Clinical negligence therefore includes all forms of substandard care, actions and inactions of healthcare providers which are below what is expected of medical professionals consequently causing pain and suffering to the patient under their care.

NHS misdiagnosis claims refers to when an individual makes a nhs negligence claims or sues the NHS or NHS GP because his or her condition wasn't not diagnosed (completely missed), diagnosed incorrectly or diagnosed late causing harm, trauma or a more complicated medical condition.

Some of the most common misdiagnosis claims relate to:

Medical Malpractice in the UK For Misdiagnosis

Over the years, the number of medical malpractice cases `have continued to increase. Consequently, the amounts paid out yearly in compensation have continued to surge exponentially even at a higher rate than the increase in the number of hospital negligence cases. The NHSLA reports that in 2018/2019, 11,625 claims were closed. Of this number, 6943 claims were successful. Additionally, 10678 new cases were opened against the NHS which is approximately 29 cases brought in every day. That year, £1.778 billion was paid in compensation with over 99% of claims settled out of court.

Examples Of Medical Negligence include the following:

Misdiagnosis statistics in the NHS according to the NHS Litigation Authority (NHS LA) for the 2014/2015 year shows that the NHS paid out £197.2m in compensation for misdiagnosis across several medical specialties. It should be noted that the NHS LA describes misdiagnosis in two ways:

Of course, this is an enormous figure considering the fact that NHS medical professionals are highly trained and qualified.

Of this figure, a whooping £185m was paid in compensation for successful failure/delay diagnosis claims representing 1,156 claims while successful cases of wrong diagnosis- 150 in all, racked up £12m.

The Society of Clinical Injury Lawyers (SCIL) and the Action Against Medical Accidents (AvMA) has agreed new medical negligence protocols with NHS Resolution. This new protocol contains some changes so that claims can be made and the processes not stalled during this period. This protocol is exclusive to only members of SCIL and AvMA.

Top Misdiagnosed Conditions In The NHS

According to the NHS LA, the top five medical conditions that are most likely to be misdiagnosed are:

Which NHS Trusts Paid Out The Highest Amounts For “Failure/Delay Diagnosis” Claims?

The table below shows the NHS Hospitals that came Top for the highest amounts paid out in compensation for “failure/delay diagnosis” claims in 2014/2015.

The Department of Health appears in top position as it takes responsibility for claims against NHS facilities which have closed or claims that cannot be attributed to a particular trust.

As the table shows, with 26 claims, the Nottingham University Hospitals Trust is the individual hospital that settled the highest number of “failure/delay diagnosis” claims.

The Liverpool Women’s Hospital received the highest number of claims for incorrect diagnosis- 46 claims in total.

According to the table, the total number amounted to 84. However, it must be noted that these figures only reflect misdiagnosis compensation claims brought against an NHS hospital only. It does not include claims against GPs or Surgeons and other Healthcare providers in Primary Health Care.

What This Implies is that there are most likely to be other misdiagnosis cases which:

Contact us today and et us help you make that claim!

Suing the NHS for Misdiagnosis is never an easy task but with the best medical malpractice lawyers, you can be sure that your misdiagnosis claims in the UK will be handled competently and you will receive the best legal representation for best misdiagnosis compensation amounts.

Before suing a hospital to claim medical negligence for misdiagnosis, it is important to know what forms of misdiagnosis exist. These are:

Why Does Misdiagnosis Occur?

Misdiagnosis occurs because of various forms of medical negligence by your doctor. They include the following among others:

For scenarios such as these, you are entitled to make GP negligence claims for misdiagnosis or sue for hospital negligence where the negligent act cuts across several departments in the hospital.

How Can I Prove Medical Misdiagnosis Claims in the UK

To prove your medical misdiagnosis claims in the UK, you will need to establish the following:

Our NHS Solicitors are able to assist you establish the existence of these vital areas to help you make a successful claim against the NHS for negligence.

What Documents Do I Need To Prove My NHS Misdiagnosis Claims?

The following documents will be required to successfully prove your medical negligence compensation claims.

Suing a hospital like the NHS for misdiagnosis requires expertise in the area of clinical negligence compensation claims. It requires the best medical negligence solicitors to help you make NHS negligence claims against doctors or other medical professionals responsible for the harm you have suffered. Our NHS solicitors will provide you the expert legal advice on how to sue for medical malpractice against the NHS or any other privately-owned hospital.

As a rule, you have a period of 12months to express your displeasure by way of complaints to the NHS for acts of negligence. The response you receive Complaints can help you to understand what actually happened and also help you build your evidence to make a claim. Your complaints can be addressed to your GP/ the doctor responsible, the Practice Manager or the NHS Governing Body.

In 2018/2019, 208,924 complaints letters were written against the NHS for medical negligence. Therefore, feel free to make complaints as it is not out of place to do so. It should be noted that making complaints does not pause the time frame for making claims. This means that this should be wrapped up as quickly as possible so as to begin the actual claims if you desire to do so.

What Should I Include In My Complaint Letter?

In writing a letter of complaint to the NHS, you will do well to include the following:

If you are making a complaint for someone else, include an authorization letter allowing you to do so. For cases where the victim is dead, you will provide proof that you are the next of kin or you obtained the permission to act on behalf of the next of kin. The NHS Patient Advice and Liaison Services can guide you on how to make NHS complaints.

The next step to take is to write to the Parliamentary and Health Service Ombudsman (PHSO) if you are not satisfied with the outcome of your complaint to the NHS. The Ombudsman being an independent body from the NHS and Government will require that you provide your original complaint made to the NHS, the response to your complaint and other details relevant to your case.

They will require these to make their investigations. Consequently, it is important to keep these documents safe as they will be vital should you decide to make claims.

The Ombudsman provides guidelines on how to make complaints on their website.

Complaints do not usually lead to compensation rather claims do. Therefore, if you make a complaint, you are most likely to receive either an apology or an explanation to what you perceived to be medical negligence. To get compensation, you will need to meet your lawyer to help you make hospital negligence claims.

We therefore encourage you to contact us as our NHS solicitors are ready to guide you on how to claim for hospital negligence.

The process of how to file a medical malpractice claim is briefly outlined below: 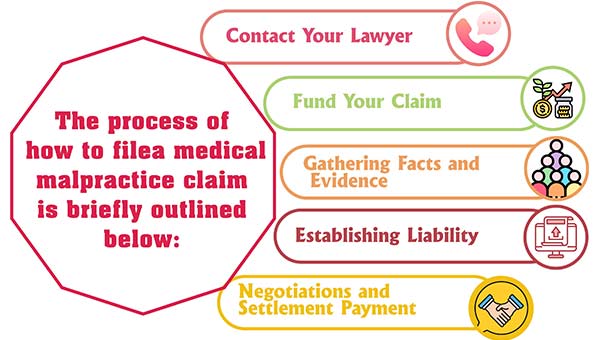 Your compensation for hospital negligence for misdiagnosis will depend on the following factors:

How Much Compensation For NHS Misdiagnosis?

Compensation for hospital negligence including misdiagnosis claims is not fixed but varies with each case. This is because the facts and circumstances surrounding each case of misdiagnosis is not the same. The severity of harm done, effect of the misdiagnosis on quality of life and life expectancy as well as losses incurred for two cases will hardly be the same and therefore both cases will receive different compensation amounts.

Notwithstanding, using the medical negligence claims compensation calculator, our negligence claims Solicitors will give you a range of what you can expect as a settlement award. The NHSLA reports that the average compensation amount in the UK is £50,000. Settlement payouts can however range between £1,000 and several millions of pounds.

The table below gives a range of settlement payout for general damages according to the Judicial College Guidelines.

The exceptions to this rule are:

Claims Involving A Child: here claims can be made until the individual clocks 21 as the three-year time frame begins to count from the 18th birthday.

Claims Involving Mentally or Physically Incapacitated persons- the time frame can be relaxed until when they are able to make claims. Alternatively, their loved ones or next of kin can make claims on their behalf.

Furthermore, in the very unfortunate incident that the individual is dead, the family can make claims for the individual with the three-year time frame beginning from the date of death.

At NHS Negligence Claims, we undertake most of our medical negligence claims cases which includes our misdiagnosis claims under a no win no fee policy. Under our no win no fee against NHS, you can speak to us for free and if we are convinced that you have a strong case with good chances of winning, we will proceed to undertake your case with no financial implications to you. This means that you will not pay a penny even if the case is unsuccessful.

However, a success fee of 25% will be deducted from your total compensation award value if the case is successful.

We pride ourselves as having a very strong record of representing persons of different backgrounds who have been victims of medical negligence and securing best possible settlement payouts for them over the years.

NHS solicitors are friendly, dedicated and will present your claims in the strongest possible way ensuring that your claims are handled competently with utmost professionalism.

We also ensure that our clients can access any form of medical care or rehabilitation necessary for their recovery or where it is not possible, to improve their quality of life going forward.

Our lawyers are in various parts of the UK so we encourage you to reach out to us and we will assign our Solicitors closest to you to take up your claims. Call us on 08009993372.